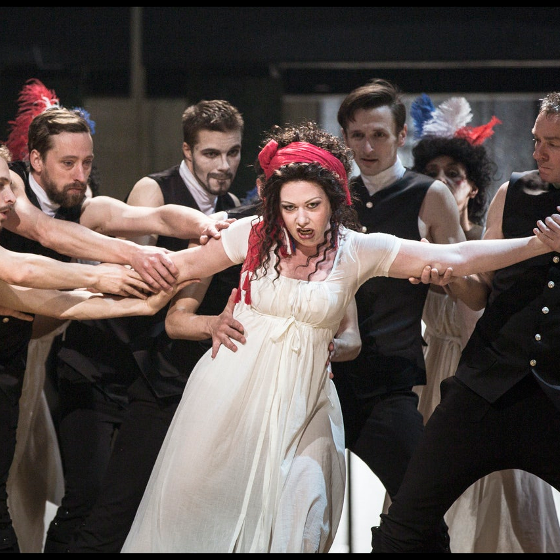 A gem of Italian verismo opera, Giordano’s Andrea Chénier was presented at the National Theatre in Prague in 1897, a mere year after its world premiere at La Scala in Milan, and three months following its first performance in Hamburg, conducted by Gustav Mahler. Yet since that time it has not been seen on our stage. Owing to the torrential dramatic music and extreme emotionality, as well as the atmosphere of the story set in the time of the French Revolution, it is one of the pinnacles of the period’s opera. The style of Andrea Chénier is markedly Italian, with its sound colour and melody akin to that of Puccini and the forcibility of the crowd scenes reminiscent of Verdi’s late operas. Also bearing witness to its being close to Puccini is the librettist, Luigi Illica, the author of the texts for La bohéme, Tosca and Madama Butterfly, who adapted for Giordano the story of the French poet André Chénier, one of the last victims of Robespierre’s Reign of Terror in 1793 and 1794. Giordano’s opera depicts the drama of a love triangle, featuring the young aristocrat Maddalena, the servant Gérard and the poet Chénier. As a result of the revolutionary events, the initially innocent flirtation turns into a desperate and wild passion – the persecuted Maddalena writes secret love letters to Chénier; Gérard, who has become a major representative of the Jacobin regime, abuses his power for his personal interest in Maddalena; while the dreamer Chénier, the omnipresent Terror notwithstanding, keeps believing in liberty, inspiration and love. Yet love amidst a revolution is a dangerous matter indeed. The production will be conducted by the Artistic Director of the National Theatre Opera, Petr Kofroň, and directed by Michal Dočekal. Premieres 5. and 6.5. 2016 The opera is staged in Italian original version. Czech and English subtitles are used in the performance. Approximate running time, including intermission: 2 hours, 30 minutes, one 20-minute intermission.