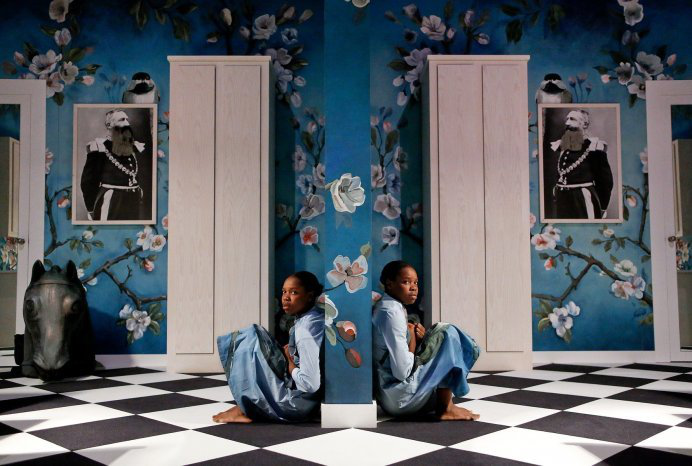 The last hour in the life of a human being. The show starts with a woman coming home and ends with her committing suicide. Or is it the other way around? Can this final hour also be told backwards – bringing her back to life again? Creatives Directed by Ersan Mondtag Performers: Doris Bokongo Nkumu, Nathalie Bokongo Nkumu Antigone, Ophelia, Hedda Gabler – in theatre history, female characters who commit suicide are always rebellious and afflicted at the same time. But the beauty of this attitude can only find expression in their dead bodies. The audience knows from the beginning that the protagonist will die in the last act, yet still we go to see the show. Accustomed to the feeling of inescapability we watch entranced as death closes in. By witnessing these scenes over and over again, we experience all facets of political and existential dedication and powerlessness. But is there a way out? Can we escape the fatal sequence of events? De Living depicts the last scene before a woman takes her own life. We see her final gestures, the attempt to maintain normality, a moment of decisiveness, then hesitation, a will to live that must be silenced, and the sudden panic in the face of an uncontrolled death. As opposed to the classical tragedies, the audience witnessing the final scene does not know what drives the woman into suicide. They can only speculate about her past. An unhappy love affair one might expect. Can she perhaps not withstand the enduring pressure of society? Or does the last scene in a woman’s life tell less about individual fate than about the tragic experience of humanity in a dystopian yet near future? Her death would then be a manifestation of a general fatigue, a mass disease, as diagnosed at the beginning of the new millennium by the French sociologist Alain Ehrenberg. But perhaps the causes of her depression lie much further back – in a history that is as painful as it is ignored, as described by the Cameroonian political scientist Achille Mbembe: At the beginning of the transnational slave trade, when people began treating other people as a commodity and proceeded to build walls to keep a part of humankind from having a share in the wealth of the world. In the near future, the majority of humans will no longer even be needed as slaves. In the final moment before death, we still struggle with an impulsive fear of an external threat yet at the same time we know that with everything we do, we are preparing for a collective suicide by bringing about the climate collapse. But once we understand that the theatre play is about today’s world, watching this final scene over and over again becomes much more ambiguous. Perhaps the various nightmarish diagnoses of our time are only based on the delusions of a few prophets who spread a media-effective apocalyptic atmosphere. And even if we could rewind the clock, we probably wouldn’t know what we could have done differently. Or was there indeed one single moment in time when we could have averted the suicide? How can we regain the strength to overcome this feeling of powerlessness and paralysis that is increasingly dominating our society?