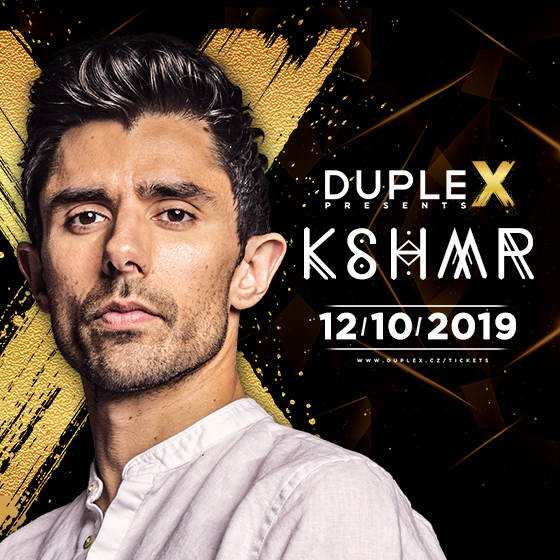 We have already announced Benny Benassi as the first headliner of the 2019/2020 season on 13th September, we are ready to announce another big star of electronic music. An innovative and pioneering producer, Niles Hollowell-Dhar is best known as KSHMR, a globally acclaimed artist from Berkeley, California, known for a signature sound merging electronic rhythms with ethnic West Asian instrumentation will come to Prague to play 12th October at the DupleX, The Rooftop Venue on Wenceslas Square as part of our concept night Duplex Presents, which continues to bring the biggest stars of the world's electronic music!

Evolving from a career in pop production, KSHMR made his first mark on dance music producing the 2010 global hit, 'Like A G6'. Later, his behind-the-scenes work on a number of big dance songs attracted the interest of iconic label Spinnin' Records.

With the confidence from a few successes in the dance world, Niles decide to leave pop music behind, and KSHMR was born. Inspired by the culture of his grandparents' childhood home, Kashmir, Niles committed to forging his own path and creating a new sound true to his heart and inspired by his culture.

Choosing initially to not show his face, KSHMR honed his craft in the studio, scoring 19 tracks in the Beatport Top 10, nine of them reaching #1, culminating with a collaboration with with Tiesto, 'Secrets'. "He really believed in me," says Niles. KSHMR revealed his identity to the world on stage at Ultra Miami 2015. Since then, anthems like 'Wildcard', 'Karate', 'Burn', 'Toca' and 'Bazaar' have exploded, solidifying his place alongside electronic musics elite.

"I'm not a regular DJ," says KSHMR of his live performances. "My show includes a fully animated story that weaves in and out of the music, a story-telling experience that gives new weight and wonder to each song." As KSHMR travels the world, each show is translated, with new voice actors, to the local language. KSHMR was awarded DJ Mag's 'Best Live Act', a nod to the unique and immersive experience he's created. Again breaking the DJ mold, KSHMR's 2016 EP 'The Lion Across the Fleld' was accompanied by a self-authored children's book, and narrative driven live experience premiered at Coachella.

Further expanding his vision, KSHMR debuted "KSHMR: The Live Experience" at Ultra 2017. Joined by live classical and ethnic instruments, as well as traditional Indian dancers, KSHMR presented his music in a way that it had never been heard. The response was overwhelming and festivals around the world were eager to take part.