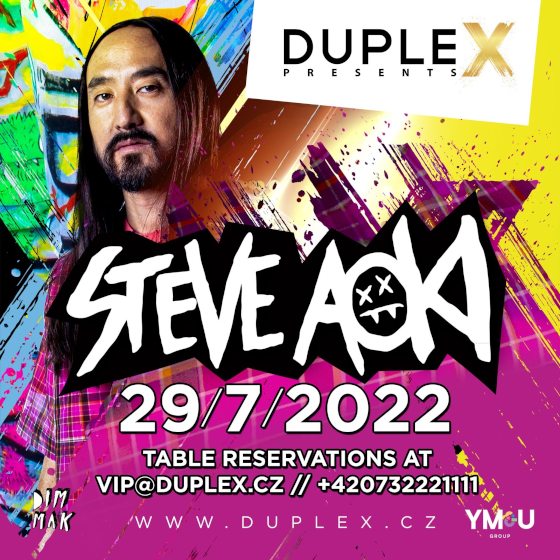 WTF is going on at DupleX Prague? Are these guys really crazy or what? Our answer is Yes, we are absolutely crazy! And It’s because we are going to bring you one of the greatest DJs of the World! From DJMag Top 10 DJs of the planet straight into DupleX, The Rooftop Venue. Ladies and gentleman, please welcome Steve Aoki in da house! Save the date – 29th July 2022 and be ready for the craziest party of your life!

At the core of everything is Aoki’s music, which he releases both under his own name and through a number of aliases. Since the release of Wonderland, his 2012 debut solo album, which earned him his first Grammy nomination for Best Dance/Electronica Album, Aoki has collaborated with an impressive list of varied artists, including BTS, Maluma, Linkin Park, blink-182, One Direction’s Louis Tomlinson, Machine Gun Kelly, Lil Uzi Vert, 2 Chainz and Daddy Yankee. He boasts 17.2 million monthly listeners on Spotify, with a 77 million average monthly reach across all his platforms. He’s released three Platinum singles, six Gold singles and has produced over ten Top 10 radio records. His label, Dim Mak, is credited with discovering influential acts like Bloc Party, The Chainsmokers, Bloody Beetroots and The Kills.

Steva Aoki will perform at DupleX, The Rooftop Venue on July 29th, 2022. Leading nightlife in Czech Republic with collaborations with the worlds best DJs and performers allows Duplex to set a benchmark for nightlife in Europe and you can only expect more in 2022. Steve Aoki will be supported by very best of DupleX resident DJs to be released on the Facebook event in upcoming weeks.

We are very happy that we can continue to bringing you the very best nightlife and amazing DupleX experience and looking forward to see you on the dance floor! This could be the best party of your life!