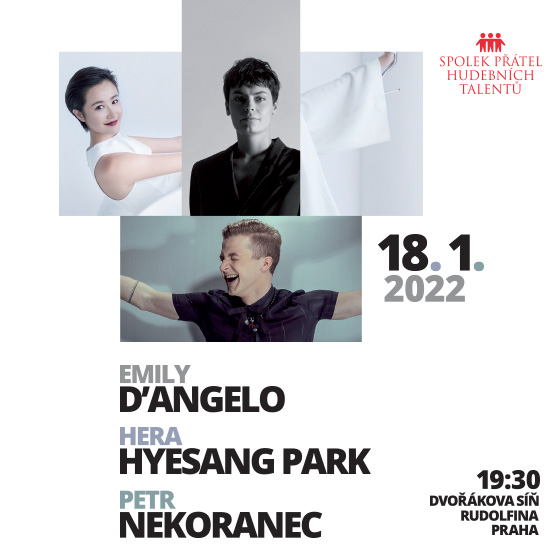 We are already familiar with the Czech tenor Petr Nekoranec and the Canadian-Italian mezzo-soprano Emily D’Angelo; the Korean soprano Hera Hyesang Park is a new face of Nachtigall Artists' concerts. All three artists were participants in the prestigious Lindemann program at the New York Metropolitan Opera.

Petr Nekoranec was as a soloist at the Stuttgart State Opera in 2018–2020, and since September 2021 he has been a soloist at the Opera of the National Theatre in Prague. Many projects await him in the 2021/22 season, including opera returns to the Margrave Theatre in Bayreuth in September 2021, again with the role of Asprando (Nicola Antonio Porpora: Carlo il Calvo), debuts at the Prague National Theatre as Almaviva (Il barbiere di Siviglia, October 2021) and Ferrando (Cos fan tutte, January 2022); in the spring of 2022, he will assume the role of Yuródivy (Boris Godunov) in the Stuttgart State Opera; in the National Theatre Brno, he will be Tamino (Die Zauberflöte) and Toulouse awaits him in the role of Almaviva.

Petr succeeded in many international competitions, as did Emily D’Angelo, who, among others, won the 2018 Plácido Domingo Operalia, where she also won first prize in the Zarzuela category, the Birgit Nilsson Prize and the Audience Prize. She has made several major debuts: as The Second Lady in Die Zauberflöte at the Metropolitan Opera (December 2018), as Cherubino in Le nozze di Figaro at the State Opera Berlin (October 2018) and at the Bavarian State Opera in Munich (September 2020); and as Dorabella (Cos fan tutte) at Milan's La Scala (January 2021). In December 2021, she will assume the role of Prince Charmant in Massenet's Cendrillon at the Metropolitan Opera

Like Peter and Emily, Hera Hyesang Park, too, has the status of a rising star. In February 2017, she made her debut as the First Wood Sprite (Rusalka) at the New York Metropolitan Opera, where she returned in October 2020 as Amore (Orfeo ed Euridice), and in January 2022, she will be Pamina (Die Zauberflöte) at the same house. At the Glyndebourne Festival, she sang the roles of Naiad (Ariadne auf Naxos, 2017l, Rosina (Il barbiere di Siviglia, 2019) and Despina (Cos fan tutte, summer 2021). In the Comic Opera Berlin, she excelled as Musetta (La bohme) and Gilda (Rigoletto) and in the State Opera Berlin she will be Adina (L’elisir d’amore) in February and March 2022.

Accompanied by PKF – Prague Philharmonia, the young artists will sing the most beautiful arias from operas by Rossini, Donizetti, and Mozart.