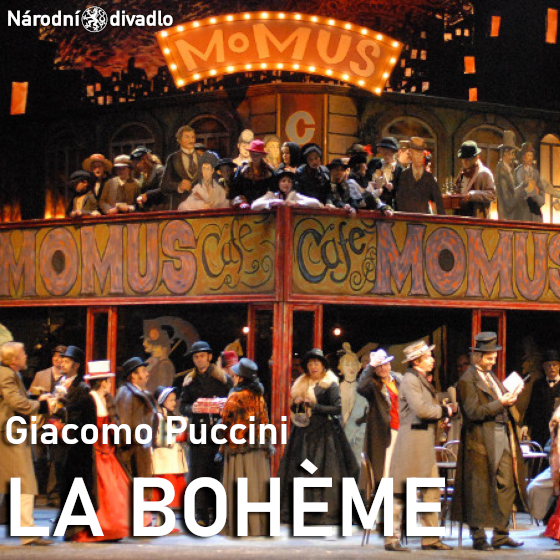 In the last decade of the 19th century, new themes taken over from contemporary realistic literature began appearing in Italian opera. Emil Zola’s literary Naturalism, purged of Romantic idealisation, strove to depict the world with all its attendant suffering, while the same path was also taken by Italian verismo, focusing on themes whose action, replete with passion, many a time led to a violent ending. The Paris-based painter and writer Henry Murger’s book Scenes de la vie de boheme, published in 1851, was a great success and Puccini immediately sensed the enormous dramatic potential in the work. The moving story of the love between the poet Rodolfo and the tender Mimi, who is not destined to live long, and of the friendship of four young Montmartre artists was an ideal theme for an opera. It was premiered on 1 February 1896 at the Teatro Regio in Turin, conducted by Arturo Toscanini. The inspired and elegant La bohéme production, directed by Ondřej Havelka, was nominated for Production of the Year 2008 in the traditional Divadelní noviny poll, while Christina Vasileva and Svatopluk Sem were shortlisted for the Thalia Award 2008 for their portrayals of Mimi and Marcello, respectively. The opera is staged in Italian original version and Czech and English surtitles are used in the performance. Duration of the performance: 2 hours and 15 minutes, 1 intermission 20 minutes Premiere - October 23, 2008