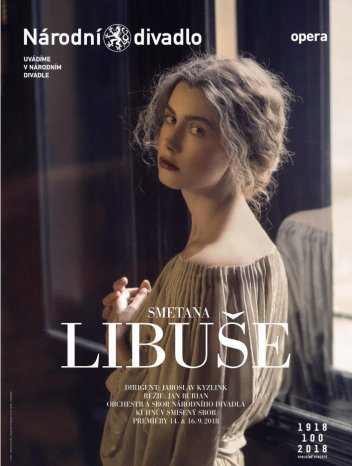 The speculations about whether Libuše is Bedřich Smetana’s most mature work within the context of his opera oeuvre, or even within the context of Czech opera in general, whether and how it can stand its ground as against the airiness of The Bartered Bride, the lyricism and absorptive power of Dvořák’s Rusalka, or the emotion and drama of Leoš Janáček’s operas, do not result in definitive conclusions – it will always depend on the angle of vision from which Libuše and any other renowned Czech opera is assessed. The visual angle that appertains to Libuše most naturally is determined by the very intention pursued by the composer and the consequent tradition. Smetana earmarked Libuše for being performed on the festive occasions relating to the life of Czech society, which after 1860 had begun markedly and palpably emancipating itself in terms of culture, politics and economics. Such an occasion was an extremely significant event in the history of Czech society – the opening of the National Theatre, first temporarily in 1881, and definitively two years later. An event that at the symbolic level widely transcended the narrow universe of Czech theatre-making and became one of the inherent harbingers of the attainment of independence in 1918. Accordingly, the centenary of the foundation of the Czechoslovak Republic is a momentous anniversary for the National Theatre itself, thus affording it the opportunity to create a new production of Libuše as a natural contribution to the celebrations. There are several genre attributions by means of which we try to characterise Libuše, with one of them being a “scenic ritual of conciliation and purgation”. At variance with the expectations placed on an opera dramatist, Smetana does not sharpen the conflicts and antimonies in Libuše, deliberately seeking instead the path to their timely pacific settlement. Whether it concerns the main action-forming dispute between two brothers about the inheritance after their late father, the antagonisms between a man and a woman, rigorous justice and friendly amiability, between those of “plebeian” and “noble” decent, between the motifs of light and darkness, fire and water, all the conflicts in Smetana’s opera are redeemed in the central character of Princess Libuše, who is not just a mythical sovereign foretelling glory for the Czech nation but, first and foremost, a cathartic fabulous symbol of womanhood and motherhood, clemency and peaceful life. The opera is staged in Czech original version. Czech and English subtitles are used in the performance. Approximate running time, including intermissions: 3 hours, 20 minutes, two 20-minute intermissions. Premiere - September 14, 2018