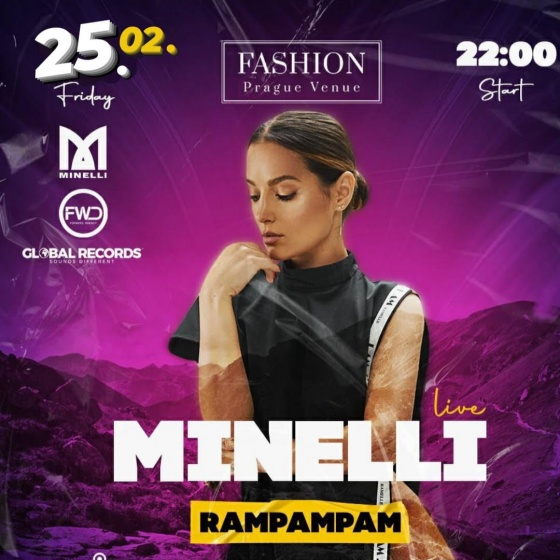 The event is canceled for organizational reasons. You can return tickets at the point of purchase and online https://www.ticketstream.cz/refundace.

"Rampampam" is a song by Romanian singer Minelli, released for digital download and streaming by Global Records on 18 March 2021 as a single. A house track, it was written by Minelli and produced by Viky Red. Lyrically, it discusses a toxic relationship and the other partner's eventual revengeful feelings. Manuel Probst, writing for the German website Dance Charts, gave "Rampampam" a positive review, praising the song's catchiness and Minelli's vocal delivery.

To promote "Rampampam", an accompanying music video was uploaded to the singer's YouTube channel simultaneously with the single's digital release. Directed by Kibzzon, it portrays Minelli and two other women pouring gasoline on a car which features a man trapped inside. The singer further performed the track on Romanian and Bulgarian radio stations throughout May and June 2021. Upon trending on several Shazam and Spotify charts worldwide, "Rampampam" topped the official rankings in Belarus, Bulgaria, Hungary, the Commonwealth of Independent States (CIS), Lithuania and Russia, and peaked at number two in native Romania, Poland and Ukraine.