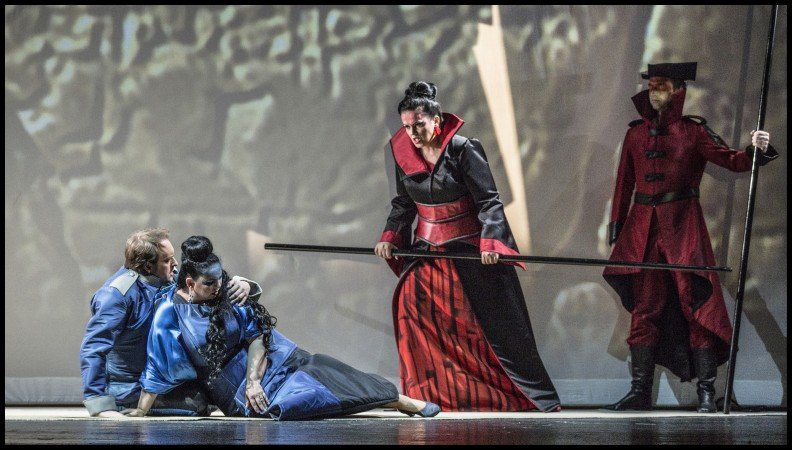 Verdi’s third opera, Nabucco, treating the Old Testament story of the Babylonian King Nebuchadnezzar (ca 630–562 BC), has been an essential title on the repertoire of every opera house possessing a large choir. In the piece, the chorus plays a very bold role, singing, among other things, one of the best-known opera scenes there is, “Va, pensiero, sull'ali dorate” (Fly, thought, on golden wings). The audience at the opera’s premiere, on 9 March 1842 at La Scala in Milan, demanded that the scene be repeated, as has subsequently been the case during performances on other stages. A number of myths have arisen as to the mission of the famous Chorus of the Hebrew Slaves. It is still not clear whether Verdi, a great patriot dreaming of a united Italy, composed it deliberately as a political proclamation. One way or another, in Verdi’s time the chorus would become a symbol of the Italians’ resistance to Austria’s supremacy, and would even serve as a political appeal in modern times. Nabucco marked the onset of Verdi’s new operatic style. While still reflecting the respective influences of Donizetti, Bellini and Rossini, the purely virtuoso passages quintessential for the bel canto era gave way to arias and ensembles fully aimed at enhancing the dramatic tension and drift. Nabucco was first presented in the Czech lands in German translation on 3 March 1849 at the Estates Theatre in Prague. The current production is staged by the celebrated Argentinean tenor José Cura, with whom the State Opera company has previously collaborated, in the autumn of 2001 during a tour of Japan with the production of Verdi’s Aida (José Cura portrayed the role of Radams) and in January 2015, when he appeared at the State Opera in a performance of Verdi’s Otello (in the lead role). The opera is staged in Italian original version and Czech and English subtitles are used in the performance. Duration of the performance: 2 hours and 35 minutes, 1 intermission 20 minutes Premiere - June 27, 2018