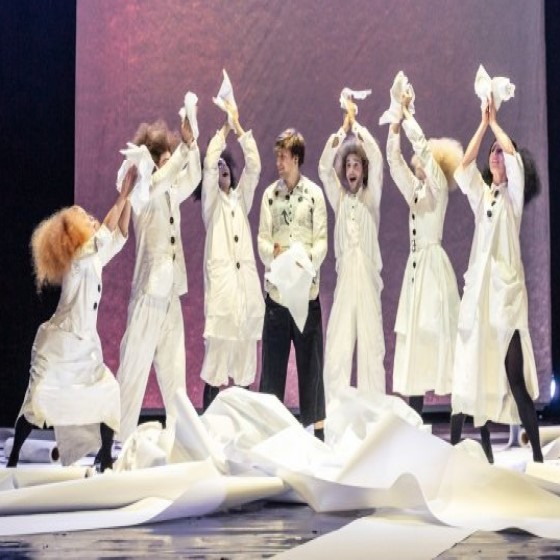 A poetic production about the frail world we ourselves create, suitable for the whole family. The main role is assigned to paper, playfulness and children’s imagination.

Imagine you could create a new world from absolute nothingness. The kind of world you may dream about, safe, yet abounding in surprises and adventures. Our hero stands at the very beginning – with imagination and lily-white paper that can become anything. A new world arises from imagination, creativity and playfulness. Truly strange things happen in the paper world, and when its frolicsome inhabitants appear, rest assured that adventure will soon follow. But a boy who likes seeking new discoveries is sometimes somewhat impetuous, and he has to learn how to behave in the world of fragile paper so as not to harm it. There is, however, much more in store – you will see, for instance, the great power of kindness and good-willingness, and the boy’s paper pals will also help to find him the path to true friendship.

The production combines mime, contemporary dance with elements of acrobatics, puppetry and animation. In the interactive ending, we will open our new world to the youngest spectators and invite them to join us in putting the finishing touches to it.

The performance is without an intermission and is suitable for children from the age of four upwards.