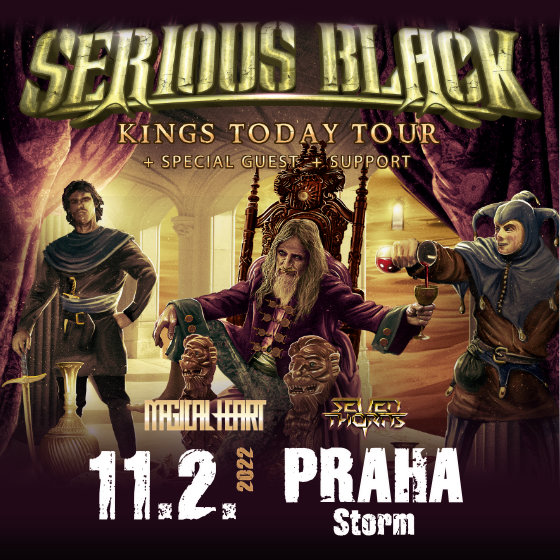 The "Kings Today Tour" of power metal band SERIOUS BLACK was postponed until February 2022 due to the coronavirus pandemic. The Prague´s tour stop fell on February 11th, 2022, to the Storm club and today we can announce two special guests of this concert!

The band MAGICAL HEART (GER) came together in 2018 and with their first album "Another Wonderland" attracted not only the media, but also a wide range of fans, not only in their native Bavaria. Their album clearly proved that melodic rock is timeless and very colorful, and the band's live concerts radiate the honest joy of the play, which draws the audience with them into their "magical kingdom". Rock’N’Roll is MAGIC! The band is now working on their second album and they are looking forward to presenting their work to you live!

The best Danish power metal band SEVEN THORNS has started writing a new chapter in their lives with the releasing of their third album "Symphony of Shadows" (2018)! Spicing up their sound with heavier, darker influences like Symphony X and Adagio they still remember their roots in neo-classical and classic Power Metal in the vein of Helloween and Stratovarius. The result is strong, catchy melodies, high-end technical musicianship and a massive, dark and rich sound. It’s Power: It’s Heavy: it's Dark ... It is The Symphony of Shadows and the band SEVEN THORNS!

It seems that the power-metal trip to the world of SERIOUS BLACK will be very interesting and exciting! Pack a good mood and taste for quality metal and arrive in PRAGUE, Storm club, February 11th, 2022!