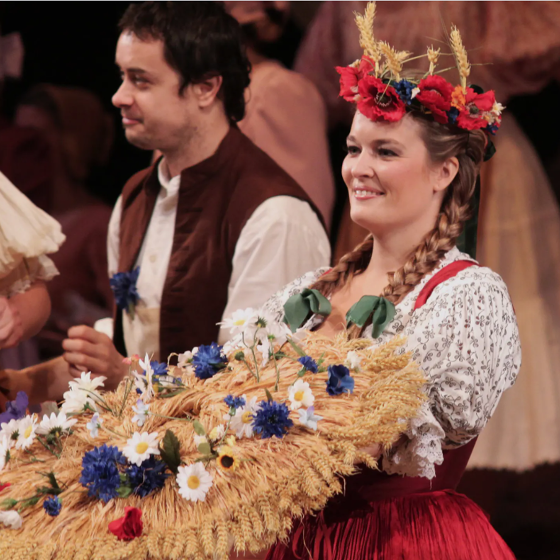 Bedřich Smetana’s The Bartered Bride, the founding work of modern Czech opera, soon exceeded the domestic framework and became a permanent part of the world’s operatic repertoire. The 20th National Theatre production of the evergreen of Czech theatre and music is, for the first time in our history, directed by a woman. Magdalena Švecová has chosen neither the path of provocative or scandalous interpretation, nor that of conventional imitation of obsolete models. The Bartered Bride’s grotesque yet highly moving story is grasped with tenderness, intelligent wit and hyperbole, as well as an understanding for the long-gone order (disorder) of human lives in the Czech village. The production’s forcibility is enhanced by Zuzana Přidalová’s costumes, inspired by plant and animal motifs, and Ladislava Košíková’s stylish choreography charged with energy and replete with naturalness. The opera is staged in the Czech original version and Czech, English subtitles are used in the performance. Duration of the performance: 3 hours, 2 intermissions 20 minutes Premiere - September 25, 2008