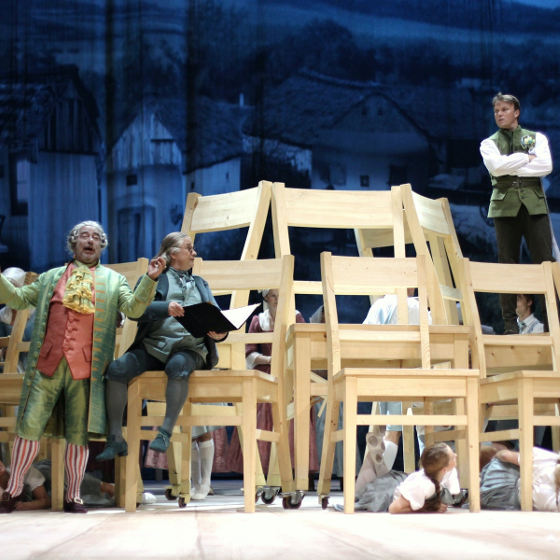 Dvořák’s The Jacobin is one of the most popular and most frequently performed Czech operas. To date, the National Theatre has staged twelve productions, most recently in 1993. The story, depicting life in a small Czech town on the one hand and the return of a “suspicious” émigré to his homeland on the other, is often understood in a somewhat simplistic, hyperbolic manner. Yet it is rather borne – primarily owing to Dvořák’s musical genius – in an ambiguous atmosphere of melancholy, sentiment, humorous bird’s-eye view and self-irony. As in many other similarly tuned Czech dramatic works, here too all the accumulated and pointed conflicts end up in humble, conciliatory and amicable lesson-learning. At the end of the 18th century, Bohuš, a count’s son, who at one time was hounded out by his father owing to his liberalism returns to an idealised Czech town. Yet before he is allowed to reconcile with his father, he and his wife have to experience a slew of provincial intrigues which the locals direct both at themselves and – because of his being suspected of “Jacobinism” – against Bohuš and his wife. We encounter a number of stock and popular dramatic types – the happily amorous Jiří and Terinka, between whom the big-headed burgrave Filip wants to drive a wedge, the count’s power-hungry nephew Adolf, as well as the good-natured teacher Benda. A crucial role in the story is played by the traditionally lauded Czech musicality; the Czechs’ affectionate relationship to music, whose ardency and tenderness is able to soften even the most hardened of hearts. The scene at the school during which the teacher Benda is preparing with the children a festive cantata in honour of the new master is one of the most remarkable in Czech opera. Orchestra of the National Theatre, Chorus of the National Theatre Opera and Kühn Childern´s Choir, Ballet of the National Theatre Opera The opera is staged in Czech original version and Czech and English surtitles are used in the performance. Duration of the performance: 3 hours, 1 intermission Premiere - October 8, 2011