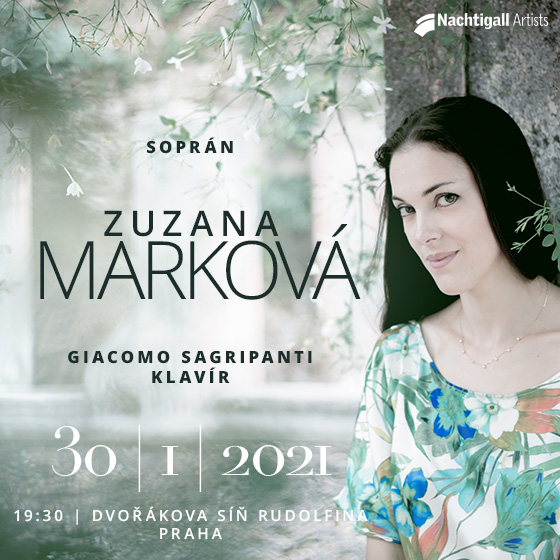 We were able to meet the Czech soprano Zuzana Marková, who has been shining as the World Opera Star for six years now, for the first time in Prague thanks to the Nachtigall Artists agency at a concert on 5th November 2018. The Prague audience was enchanted as much as opera audiences in Italy (Venice, Florence, Genoa, Rome, Palermo, Naples, Turin), France (Paris Opera), Austria (Vienna State Opera), Germany (Berlin State Opera) or the USA (Los Angeles). There is no doubt that Zuzana Marková has become one of the prominent singers: the Czech soprano has established herself abroad, led by Italy, in the Italian repertoire, and moreover in such a competitive field as Gilda, Violetta or Lucia di Lammermoor.

The charismatic Italian conductor Giacomo Sagripanti is her partner on stage, and in life. In 2016, he won the Best Young Conductor Award from the International Opera Awards. He collaborates with renowned opera stages such as the Vienna State Opera, the Paris Opera, the Deutsche Oper Berlin, the Bavarian State Opera in Munich, the festivals in Glyndebourne and Pesaro, etc. In December 2020, he will make his debut at the Metropolitan Opera New York (Il barbiere di Siviglia). Although he also studied the piano, he will now sit at the piano very rarely – only to accompany his wife, Zuzana Marková.

I Capuleti e i Montecchi, Act I

I puritani, Act I