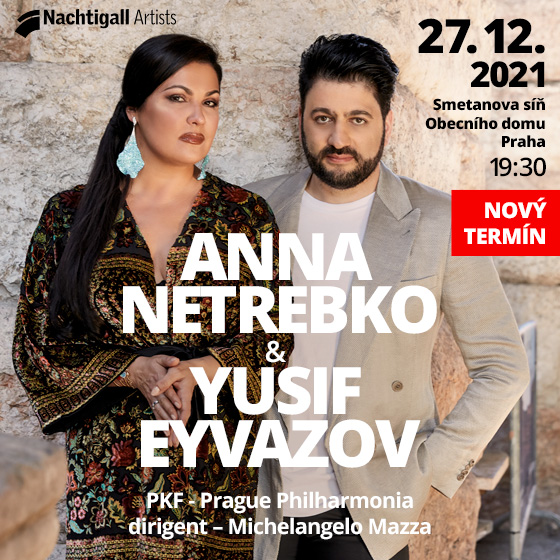 That's right, the most famous opera couple will visit Prague in 2021! We are extremely happy that both artists will celebrate the spring holidays with us in Prague. With them, even more musical sunshine will return to Prague. They will not be together in Prague for the first time. Anna Netrebko came to support her husband in his personal debut in the title role of Giordano's opera Andrea Chénier at the Prague National Theater on January 30, 2017, and Yusif accompanied Anna to Prague in the summer of 2015. Anna Netrebko accepted Nachtigall Artists invite three times: she made her Prague debut on November 23, 2012 as part of her European tour with P. I. Tchaikovsky’s Iolanta. The second time she appeared on July 10, 2015, along with other famous opera singers, Ekaterina Gubanova, Aleksandr Antonenko and Ildar Abdrazakov. For the third time, she performed at a solo recital with pianist Malcolm Martineau on November 15, 2018. The concert of the star couple Netrebko - Eyvazov in arias and duets from Giacomo Puccini's operas promises yet another unforgettable experience. There is no need to introduce them: Anna Netrebko, a soprano of Russian origin, has been a phenomenon of the opera world for many years. In February this year, she won the Polar Music 2020 Award, which is considered the Nobel Prize for music. The Azerbaijani tenor Yusif Eyvazov is not only her life partner, but also her almost indispensable stage partner. Their calendar is full, their performances and concerts are hopelessly sold out.