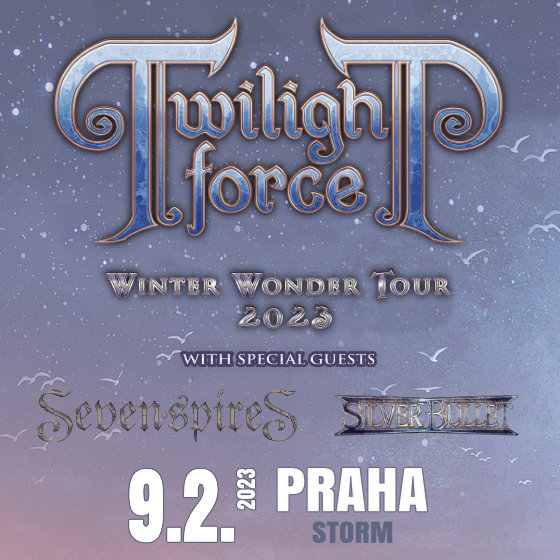 Swedish warriors TWILIGHT FORCE have assembled special guests for their winter tour, renamed it, completely rescheduled it, and now they're announcing it all. Their European tour is now called "Winter Wonder Tour 2023“ and TWILIGHT FORCE will arrive with on February 9th, 2023 in PRAGUE, Storm Club!

Special guests on the tour are the Americans SEVEN SPIRES, who are at home in the darker corners of the melodic metal world with strikingly emotional melodies and relentless technical prowess. They are known both for their melancholic concept albums and their penchant for pushing genre boundaries, drawing influence from the entire spectrum of metal and beyond, passionately reaching into jazz, orchestral music from late romanticism, movie soundtracks and other areas. Their "covid" album is called "Gods of Debauchery" and they are already looking forward to presenting not only it, but themselves to you live on tour with TWILIGHT FORCE!

The second special guest is the previously announced Finnish band SILVER BULLET. These brave metal knights are excellent allies in any fight. With their current album "Mooncult" and brand new singer Bruno Proveschi, they fearlessly take the front line of defense against the forces of darkness!

The wait for this tour is getting shorter, so go check out the cellars now to see if your weapons are not rusting. Try them, sharpen them and get ready for a magical winter battle with the TWILIGHT FORCE and their strong allies, February 9th, 2023 in Prague's Storm club!